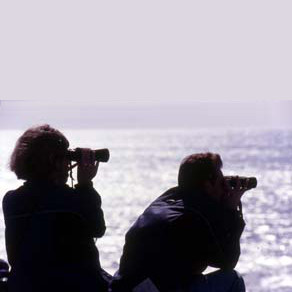 The eastern Pacific gray whales pass by Point Cabrillo twice, on their southward journey from mid-December into February, and again going north between February and early May. They do not migrate simultaneously, and not all the whales make it all the way to Baja. Some linger off shore; observations suggest that these are primarily the younger males. Newly pregnant females lead the northward migration, followed by males, and the last to leave Baja are usually females with babies.